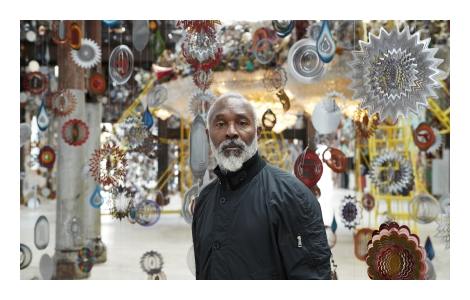 Nick Cave tackles the question: Is there racism in heaven?

American artist Nick Cave returns to Carriageworks with an exhibition triggered by gun and race-related violence, and yet welcomes Australian communities into the discussion.

Director of Carriageworks Lisa Havilah was direct when she probed American artist Nick Cave. 'Is there racism in heaven?' she asked.

The Chicago-based artist said that while he wasn't sure, his massive installation Until, unveiled this week at the Sydney venue, offers viewers an experience that addresses racial profiling, gun and race-related violence in America.

The exhibition's title Until, plays on the phrase "innocent until proven guilty", flipping its emphasis to "guilty until proven innocent". Cave says it is a direct comment on the racial profiling of African Americans.

He told media that the project was triggered by the rolling events across America that spiked the #blacklivesmatter movement, which started four years ago when – working in his studio – he heard a new broadcast that an unarmed 18-year-old – Michael Brown – had been fatally shot by police officer Darren Wilson (later leading to the Ferguson protests.)

Cave said Until was built around the extremes of brutality that have been happening. 'I felt we needed spaces to be heard, venues to come to, to collectively try to bring an understanding of all this violence. I think I'm a messenger first and artist second,' Cave said.

Cave was last in Sydney to present a work with a very different tone – HEARD.SYD (2016) – where a herd of gyrating dancing horse-like figures activated Carriageworks and Martin Place. It was later presented in Brisbane.

As with that project, collaboration again is pivotal to this new project by Cave. The installation will be the site for community collaboration for the three-month period. Artists already scheduled include Romance Was Born designers Luke Sales and Anna Plunkett, performer and visual artist Bhenji Ra, Thomas E.S Kelly, singer-songwriter Ngaiire, poet Ileini Kabalan akak Lye the Mystic, chef Kylie Kwong, filmmaker Claudia Sangiorgi Dalimore, and others.

Havilah said: 'Nick Cave is an artist who is undefinable in the way that he can easily move between artistic forms, while also creating a work that has a great generosity to other artists and to our community.'

It is a big topic racial profiling and violence, and it takes a big installation at the hands of Cave to tackle it. In fact, Until required six 44 ft shipping containers to freight the work to Sydney.

Central to the installation is Crystal Cloudscape, a 12-metre-long, six-metre-wide sculpture weighing in at 5.4 tonnes and made from 24,000 crystals, beads, 12 chandeliers and a bricolage of found objects – several gilded pigs, ceramic birds, 17 case-iron "jocko" lawn jockeys, a life-sized crocodile, holy water receptacles and money boxes.

It is generous in scale and in terms of the experience it offers viewers. Visitors can climb a staircase to Cave's "heaven", or view it from the Carriagework's level three platform.

Cave's cloud is surrounded by a forest of 16,000 gently twirling, metallic mobiles that are somewhat hypnotic as they shift in the light and air currents as you move through them.

While this installation might remind one of their childhood, Kinetic Spinner Forest has a more sinister underbelly – the shapes reflecting the form of bullets, guns and tears.

In another gallery, there are two further massive installations: Beaded Cliff Wall which is constructed from millions of plastic hair pony beads that fall in a curtain around the space and reference graffiti and protest flags.

The second piece Flow/Blow is a fan-propelled installation of party streamers, which has a particularly Sydney feel for this time of the year.

There are also wall-vinyl murals across the exhibition space and the presentation of Hy-Dyve – a 14-channel video installation that Cave said was like being inside one of his famous "soundsuits" – a series that Cave first created in 1992 in response to the Rodney King beating and subsequent LA riots.

There is a cycle here that reaches back to shootings last week, shootings five years ago and those 26-years ago. One can't help but be split by Cave's proposition 'Is there racism in heaven?'

The gift of beauty, life and energy this installation imparts is palpable, and yet, beneath its bling is a message deep and persistent.

I am again reminded of Cave's words: 'I think I'm a messenger first and artist second,'

Nick Cave: Until is a collaboration between Carriageworks, Massachusetts Museum of Contemporary Art and the Crystal Bridges Museum of American Art.

Nick Cave: Until will be showing at Carriageworks from 23 November to 3 March 2019

There have also been some other articles published about this exhibition, including The Guardian, Broadsheet, ABC News, and The Sydney Morning Herald.