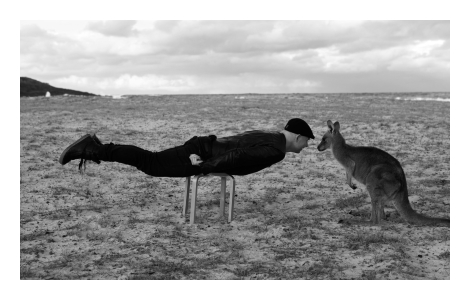 An aviatrix, a tonne of water and an owl are an unlikely pairing but with sublime results in Shaun Gladwell's newest work, The Lacrima Chair, unveiled at Sherman Contemporary Art Foundation, writes Gina Fairley at ArtsHub.

'If I wasn't an artist I would want to be an ornithologist,' the celebrated Australian ex-pat artist told ArtsHub, 'I am really obsessed with animals in general, but birds in particular.'

While an owl features in Shaun Gladwell's site-specific commission at SCAF, it is a broader narrative of flight and the evocative emotional space that a passage between places can offer, which has captured Gladwell's imagination in this new work.

The Lacrima Chair (Project 24) is a four-part project that moves the visitor from heady French-inspired art speak, to economy air travel with a whimsical embrace of Australian aviation history. Can such a mix be pulled off?

Landscape is the connector that makes it possible, as Gladwell said: 'I am kind of addicted to trying to record that kind of space; the energy or the force of the landscape here - even more so now that I leave it often.' Gladwell has been living in London since 2010.

Visitors to the gallery arrive to a projection cast on the floor of a helmeted figure holding an owl. For those who know Gladwell's work, it is evocative of Maddest Maximus – a kind of post-sci-fi alter-ego first introduced by Gladwell in his exhibition that wrapped up Sherman Galleries commercial activities in 2007, and then presented at the 23rd Venice Biennale in 2009.

But rather than the early outback environment with its ever persistent horizon, Gladwell forces the visitor through a screen of mist to a new watery world. It's a kind of Alice in Wonderland threshold and arriving beyond it is an economy aircraft seat that sits central to the gallery, which is literally showered by a constant stream of water. It is his lacrima chair – an object that induces tears.

'I liked like the idea of being on a plane, being in a personal space but also public – it's a contradiction. You feel like you could cry - the cabin pressure, alcohol, you have just left family, you are probably exhausted - people's defences are down. I just like watching people cry on planes. and I have of course dropped my guard, whatever that means, the super ego stops functioning and you just start to be overwhelmed by emotions,' said Gladwell.

'I wanted to explore that in a sculpture but then I also had this story rolling around in the back of my head of my grandfather stationed in Darwin during WWII. At night they'd set up open air cinemas away from base and would sit in the fields watching Hollywood silverscreen classics.' Gladwell continued that on occasion a tropic downfall would obscure the screen but they would just stay and watch. 'So this idea of sitting on plane and raining and this notion of lacrima started conflating into one object.'

With a tonne of water circulating through the installation, you are invited to don a rain poncho and sit in it, coming face to face with Gladwell's video portrait of the great Australian aviatrix Nancy-Bird Walton (the hyphen in her name intentionally misplaced to reflect her nickname), adding another layer to this very personal narrative.

Gladwell confirmed that it is the first time he has used a history so explicitly in his work, but also such strong personal memories.

'I am a Goldsmiths kiddie so I will always privilege a viewer's interpretation over artistic intention. That is just the way I have been brainwashed, but I do have personal references in this one,' said Gladwell.

'I also wanted to describe these moments when Nancy-Bird is in these enormous spaces, but not necessarily the sky. It is my fantasy that she didn't really ditch her plane in the ocean, but I imagine her trying to find her friend - the man who helped her learn how to fly and who is probably the most famous Australian aviator Charles Kingsford Smith – who lost his life attempting a record and ditched his plane off Burma. A lot of it is my fantasy projecting (onto that history) but always returning to the landscape,' explained Gladwell.

Shot in Australia, the large video work has a lyrical quality, its slowed movement in sympathy of Gladwell's other videos of a body in the landscape, but rather than persistent, flat, sharp horizon, performer Kathryn Puie bobs around like a cork in a swell as Bird Watson.

Sitting somewhat out of place in a corner hovers an oversized tome. Self Portrait as a Semiotext(e) Foreign Agent, 2015, is co-authored with Philosophers Denise Thwaites and Paul R. Patton (one of the original translators of Semiotext(e) books) to create a theory of "patafunction". The essay reads like a classic text from the 1980s and 90s that influenced a generation of art students including Gladwell, when he studied at the (now) UNSW Art and Design School.'

'Those French writers had an enormous influence on me and the generation before me - the post modern madness - and so it was like a self-portrait. I wanted to simulate one of those books that I fetishized in the end. I loved them as objects and I tried to take on the theory, which I creatively misunderstood a lot of,' Gladwell added with a laugh.

'I have had a long time love affair with France and Gene (Sherman) noticed I was showing a lot over there – the book really makes that link', added Gladwell.

This connectivity is fleshed out in a survey of Gladwell's work at UNSW Galleries curated by Geneva-based Dr Barbara Polla and Paris-based Prof. Paul Ardenne, using Gene and Brian Sherman's personal collection as a spring point for dialogue and context with other works held in collections internationally.

It is the first time in the Gallery's young history that its three levels have been handed over to a single artist.

Gladwell told ArtsHub: 'I didn't have much say in it. It was a thrill they (Polla and Ardenne) had their own take on the work and a lot of the readings of the work were new to me – I went with it gracefully and it was amazing.'

'Barbara really picked up on this idea of "doubling", which was always part of my thinking, but she has extracted all these other references out of it, and Paul was on to speed and gesture and had his own take on it – so for me it was a learning curve,' added Gladwell.

While the SCAF exhibition seems overtly "wet" in comparison to Gladwell's outback works (and might even evoke a hint of Bill Viola), one only has to remember Gladwell's Storm sequence (2000) filmed with a misty turgid Bondi backdrop. It set an Australian record for video art sold at auction in 2007 and defined a trajectory in Gladwell's career. The UNSW exhibition keeps the new work in context and anchored to Gladwell prolific and internationally celebrated career.

'There is a really early work this Riding with Death work which is wild for me to see at the (former) COFA. That was my first video work from 1998. I had a camera and did an experiment up in F Block - that video took place just above the museum – so it is a nice return with that work.'

Awash with memories, The Lacrima Chair and Collection+: Shaun Gladwell will continue across the two venues until 25 April.