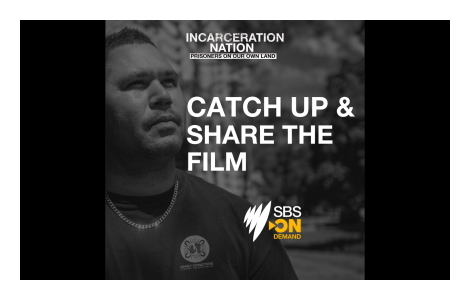 Incarceration Nation exposes the racist foundations of policing and imprisonment in Australia, but at what cost?

Warning: This article contains content that may be distressing. It contains information on deaths in custody and the violence experienced by First Nations people in our encounters with the Australian carceral system. It also contains references to and the names of people who are now deceased.

David Dungay Jr died in Sydney’s Long Bay prison in 2015. In the opening scene of the documentary Incarceration Nation, Dunghutti woman Aunty Leetona Dungay, David’s mother, sets the scene for what viewers are about to witness.

While David Dungay’s family’s campaign was not discussed in depth in the documentary, there’s no question why they have lodged a complaint with the United Nations Human Rights Committee to seek accountability for the guards involved in his death.

David Dungay’s death is one of about 500 Aboriginal deaths in custody since the Royal Commission report was released in 1991. No one has ever been held accountable for these deaths.

Directed by Guugu Yimithirr man Dean Gibson, Incarceration Nation is relentless and emotionally demanding of its audience. This is due to scenes of explicit violence perpetrated against Aboriginal and Torres Strait Islander people - especially children - by those in authority. It might be one of the most disturbing things you ever watch.

For non-First Nations people, Incarceration Nation has the potential to shake the very core of your understanding of what it means to be Blak on this continent.

First Nations people make up 3.3% of Australia’s population. Yet 65% of children incarcerated in this country between the ages of 10 and 13 are Aboriginal and Torres Strait Islander. First Nations children make up 55% of the child prison population overall.

Aboriginal women, the fastest growing prison population, make up 34% of those incarcerated in women’s prisons.

While these statistics are often used by criminologists and the state to represent the problem as one of “over-representation”, in reality they reflect the colonial function of incarceration in the Australian settler colony — to further the erasure of First Nations people.

These statistics are increasingly recognised as a serious breach of human rights internationally.

Yet in Australia, despite demands from First Nations communities to prioritise decarceration and community-based responses to ensure our safety, state and territory governments continue to prioritise carceral expansion. There are even plans to build more prisons and increase policing resources.

Incarceration Nation weaves together historical records, archival footage, statistics, expert advice, and the testimonies of individuals with lived experience and families who have lost loved ones in custody.

For First Nations viewers and our advocates, aspects of this documentary stand within a powerful apparatus to expose the systemic, colonial underpinnings of Australia’s “justice” system.

This film has the potential to be a valuable resource attesting to an indisputable reality that First Nations people have always been acutely aware of: that Australia’s carceral system is founded on a genocidal and colonial intent toward Aboriginal and Torres Strait Islander people. An intent driven by a desire for land.

Change will not be achieved through reform, but through the abolition of the colonial system, and the strategic governance and nation-building efforts of First Nations people.

From the views expressed by many First Nations people in Incarceration Nation, including public servants, it is clear that expectations of policies and programs to ensure “stronger” relationships between Aboriginal people and police have lapsed. What is being requested now is that policing and imprisonment be overhauled and dismantled.

Trusting in carceral reforms alone is, in fact, a dangerous solution. As Yuin Aunty Vickie Roach, an advocate for prison abolition, highlights in the documentary, it is not possible to fix a system that is not broken, but rather operating exactly as it was designed to do.

The limits of police reform are also highlighted in the documentary by Yorta Yorta, Wemba Wemba and Barapa Barapa woman Apryl Watson, whose mum Aunty Tanya Day died in police custody in 2017. Speaking to the failure of police to follow their own guidelines, Apryl Watson explains:

They failed their duty of care, they didn’t even follow their own police manual to check her effectively.

Incarceration Nation brings to the forefront the intimate relationship between the incarceration and policing of First Nations people and ongoing colonisation.

However, for First Nations audiences, we conclude that your discretion is advised. We don’t believe this film was made for a Blak audience.

As First Nations people researching, educating and campaigning in this space, watching Incarceration Nation raised a number of ethical questions that we feel are imperative to ask:

- how do we speak about violence without reproducing it?

- how do we speak about violence while ensuring the safety of our own people?

- how do we honour the stories and lived experiences of those surviving state-sanctioned brutality, without producing consumable stories of damage which, according to Unangax̂ scholar Eve Tuck, settlers hunger so ravenously for?

We believe these critical questions required further attention from the creators of this film, specifically in relation to the impact on First Nations audiences.

Read more: Not criminals or passive victims: media need to reframe their representation of Aboriginal deaths in custody

How you can take action

While this documentary included the testimonies of those with lived experience, less present was how these individuals and families are leading the resistance against continued state-sanctioned brutality. Given the premise of this film, this was a missed opportunity.

Here is how you can support this critical work:

- support community-based responses, which support First Nations people through their encounters with this violent system

- demand that taxpayers' money is used to build homes not prisons and funding is redirected away from the carceral system and into transformative justice and prevention, such as secure housing and health and well-being services

- donate to organisations, campaigns and mutual aid groups working to support First Nations people and other groups who are criminalised by the state.

If Blak lives really matter to you, after watching this film we ask you to hold elected representatives, police and prison officers, coroners, judges and the courts accountable. We implore you to identify how you may be implicated, particularly in your silence, and to act.

As Wiradjuri and Wailwan lawyer Teela Reid relays in Incarceration Nation:
We need people to show up. Not just on the front line, but every day in their personal life and in their professional lives to dismantle these legacies of oppression.

Once you've watched this documentary you cannot say you didn't know. If you watch this film, hear these stories, and don't do something about it, your lack of action is complicity.

TO READ THE ORIGINAL ARTICLE (THE CONVERSATION), CLICK HERE

There are some immediate Calls To Action in the wake of the broadcast:

- Please complete this survey – so the filmmakers can understand how people are be affected by the film and how they think it can be used for change;
- Recommend to others to watch Incarceration Nation on SBS on Demand until 29 August 2022;
- Support is available, if needed. Some resources here:
https://incarcerationnation.com.au/learn-more/

The Incarceration Nation trailer is across all social media channels: