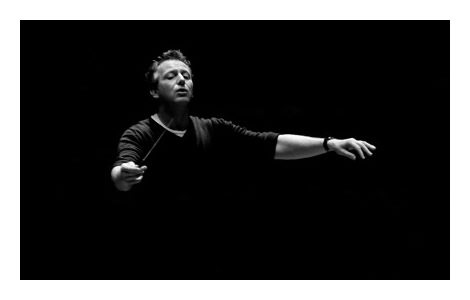 Australian conductor Alexander Briger has music in his blood. His uncle was the country's most famous conductor, the late Sir Charles Mackerras, and both are descended from composer Isaac Nathan. Mr. Briger decided to become a conductor when at age 2 he watched Sir Charles lead the Sydney Symphony Orchestra in Mahler's Fourth Symphony.

Now 42, Mr. Briger has conducted a host of major orchestras, including regular performance with the Philharmonia Orchestra and the London Philharmonic Orchestra, as well as the Sydney Symphony. After many years working abroad, he returned to Australia two years ago with a dream of bringing together Australia's best expatriate musicians with top local players in a single ensemble.

Last year that dream became a reality with the inaugural concerts of the Australian World Orchestra at the Sydney Opera House. Mr. Briger spoke to Rebecca Thurlow about the challenges of coordinating the event, and his plans to showcase the Orchestra to the world.

When I was conducting overseas, I noticed there are so many Australians holding major positions in incredible orchestras around the world. Over a post-rehearsal drink we'd say, "Imagine if we could get all of these players together." But we thought it was impossible.

About five years ago, I was invited to conduct the Japanese Virtuoso Symphony Orchestra. It's the crème de la crème of Japanese musicians who come together once a year. I thought if they can do it, then so can we.

About two and a half years ago, I thought more in-depth about the logistics of putting it together. The first person I took it to apart from my wife was my uncle. He said "what a wonderful idea." At first he wanted to conduct it, but he didn't get a chance. He died last year after a battle with cancer.

My family and I returned to Australia about two years ago to set this up and so our three kids could be closer to their grandparents and cousins. I started contacting the various players and they said they'd love to play in it.

That's when we approached corporate sponsors to help pay for the flights and accommodation. We had to raise A$1.6 million. The Opera House offered us some dates and then we started to go for it. One of our funding ideas was to ask people to sponsor specific players for A$5,000. My uncle sponsored the principal oboe chair because he started his working life as an oboist.

I approached violinist Richard Togenetti, composer Brett Dean – creator of the opera Bliss – and conductor Simone Young and we started to gather up all these incredible players. The hard part was the logistics of getting the players to take time off their respective orchestras. We're talking about something like 50 orchestras all around the world. About 90% of the players we asked could make it. In the orchestra there are 48 expatriates and 48 Australia-based players.

We had four days of rehearsal, six hours a day. We knew it would be tight and the programmes were tailored to that. We chose works that the orchestra all knew, like Beethoven's Ninth and Tchaikovsky's Sixth.

At the first rehearsal, when Simone first began conducting, we started with Tchaikovsky's Sixth Symphony. We had a bass section which was one of the best on Earth, full of Vienna Philharmonic and Berlin Philharmonic, Sydney Symphony, you name it. They start that Symphony and everybody heard it and went "Wow!"

It's difficult for the winds because in Europe, they tune to a higher A. So some of the players had to go up a bit up an domes down and that means they have to take time to form a perfect intonation. But at the end of the day, it really came together.

The orchestra sounded completely different from any Australian orchestra. It was very European, very rich, bold and quite virtuosic. A lot of the players said it was the best orchestra Australia has produced and it really was in a different league. It isn't a day job for these people. They really wanted to be there and make it work.

That electricity really comes out to the audience. It's the je ne sais quoi, the X-factor. In our first performance when the orchestra walked out, the audience erupted. They realized these players have gone out and conquered the world, that we should be incredibly proud of what they've achieved.

They wouldn't stop applauding. I've never seen anything like it before, not for an Australian orchestra. The Berlin Philharmonic got a similar response but that's about the only orchestra I've ever seen that got an applause like that.

Oboist Nick Deutsch had to tune the orchestra, blow that A, and he said to me later he couldn't. He was so choked up. He had to take 30 seconds to calm down.

For many of these players, no one in Australia knew who they were. Finally they got the platform where they could perform in Australia. At the end of the performance, it was a total standing ovation. They would not let the orchestra go.

The evenings were a huge reunion. Every player said "we can't wait to do this again," that the event renewed their passion for orchestral playing.

In December 2013, we've got our next performances in Melbourne and Sydney. I can't tell you who the conductor is yet but it is a major, major artist, one of the greats. He's not an Australian but it will change the face of Australian music.

We are going to start it biennially for six years and then we'll try and make it as a yearly event. We'd like to have a major conductor come out every second year.

We showed Australia what we have produced. It isn't only sport where we have excelled. It isn't only about Jessica Watson, Sam Stosur and Cadel Evans. We have done the exact same thing in classical musical. It's just that you don't know about it. Well now you do.