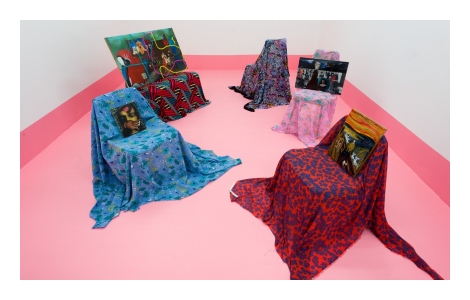 The Sydney Museum of Contemporary Art's annual "Primavera" exhibition, which is on show until 30 November 2014, showcases the work of young Australian artists aged 35 years and under. Initiated in 1992, "Primavera" is somewhat of a barometer for the Australia contemporary art scene and a predictor of future art stars. Many of the artists who have been featured in past editions of "Primavera" have gone on to achieve great success with their careers, exhibiting throughout Australia and internationally.

In 2014 Sydney-based artist Mikala Dwyer was invited as guest curator. Dwyer was one of four artists in the inaugural Primavera at the MCA in 1992 and her work was the subject of a solo exhibition at the MCA in 2000–01. The artists Dwyer selected for Primavera 2014 are: Madison Bycroft, Ben Denham, Nick Dorey, Caitlin Franzmann, Hossein Ghaemi, Emily Hunt, Ishmael Marika, Barayuwa Munungurr, Sean Peoples and the Telepathy Project, Alison Puruntatameri, Lucienne Rickard, Marian Tubbs, and Paul Yore.

Dwyer said, "I am privileged to have travelled to parts of Australia I have never been to in the process of curating Primavera for the MCA, visiting and viewing the work of many brilliant young artists.

"When I think through the work of the artists I've selected for Primavera, all sorts of ideas, interests and associations pop up, including Surrealism, robotics, queer fertility, ritual, time, witchcraft, science, alchemy, dreaming and telepathy.

"This Primavera is but a small selection of young Australian artists making wonderful work driven by an endless intelligence and deep curiosity. I am ever grateful for their inspiration and resilience."

To find out more about her curatorial approach and her experience curating "Primavera" 2014, BLOUIN ARTINFO got in touch with Mikala Dwyer and asked her a few questions.

Primavera is one of the most influential showcases of contemporary Australian art. What were your aims and goals in terms of the picture and story you wanted to present of young Australian artists?

I hope the exhibition will change the world, maybe slowly, quietly, imperceptibly, even for just a second, through the work of these deeply committed artists.

Where did you start the curatorial process? Was it with a particular artist, artwork, theme, or concept?

I started by trying to say no to curating Primavera, that was the beginning point. I'm not very good at saying no and probably not much good a curating. I see it as curating itself.

What were you looking for when you were selecting the artists for Primavera?

Artists under 35 who are brilliant, courageous, funny, deeply committed, generous, and who just get on with it and don't give a fuck what people think.

Even though the artists in Primavera 2014 engage with a wide range of themes and work with a diverse array of materials and processes, the exhibition is quite cohesive. What are the common threads or lines of inquiry that contribute to the cohesiveness of the exhibition?

I don't know which is why I'm a bad curator. I'm not interested in making sense of it.

You travelled all over the country in search of artists for the exhibition. What encounters or experiences excited you the most during your travels?

Visiting Tiwi Islands and Yirrkala; I had never been there before and those people are really inspiring.

How has the emerging art scene in Australia changed and evolved since you exhibited in the very first Primavera in 1992?

I'm not sure things evolve, maybe recycle a lot and very occasionally mutate. It's still quite a conservative culture. Most of the art schools are limping along, collectors are not very adventurous, artists are being censored and galleries open and close or occasionally struggle on.

We have an arts minister that would like artists to make "accessible" work so people can understand it. I've never thought art was about understanding anything, quite the opposite and necessarily so. But despite all that, artists keep going and dreaming up all manner of things that keep us wondering, thinking, questioning, arguing, or being bored or outraged.

I am sure there are many other artists who you would have liked to have included in Primavera. What gave the artists you did choose the edge over those who you couldn't include?

Yes, there were many artists who could have been in the final line up. The final line-up is no better than the ones left out other than I felt their practices could cope with being in close proximity to each other and still shine. A sort of robust generosity and sociability in their work that I felt meant they could co-exist in tight quarters and not drown each other out. And actually enliven and reinforce each other's work.