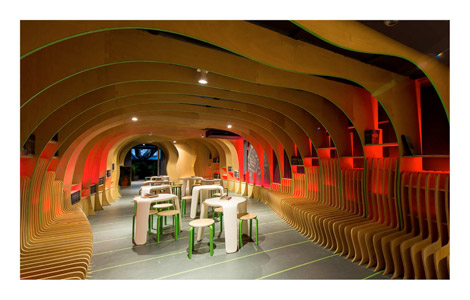 Interview with Cath Keenan, Executive Director and Co-Founder of the Sydney Story Factory

The Sydney Story Factory is a not-for-profit creative writing centre for young people at 176 Redfern Street, Redfern, Sydney. Trained volunteer tutors offer free help to write stories of all kinds. Programs target marginalised young people, and those from Indigenous and non-English speaking backgrounds, but are open to everyone.  The SSF is an extraordinary example of the community coming together with more than 50 companies donating money, time and over 2000 hours of labour for the benefit of the children in our community.

Cath Keenan was formerly a journalist with The Sydney Morning Herald, working as an arts writer and as literary editor. She has a doctorate in English literature from Oxford University. She is the co-founder of the Sydney Story Factory, and has volunteered for one week at 826 Valencia. She left The Sydney Morning Herald in February 2012 to work as Executive Director of the Sydney Story Factory.

NMF: Where did the inspiration come from for Sydney Story Factory?

CK: We were inspired by the 826 Valencia Writing Centre in San Francisco.  I first learned of the concept when I watched a TED talk online, and showed it to my colleague and co-founder, Tim Dick.  Given it was such a great idea we were shocked to learn that something like this had not yet been done in Australia.  So, Tim said, “I think we should do it!”

NMF: How did you adapt the ideas of 826 Valencia to produce the Sydney Story Factory?

CK: We changed the model of our centre slightly to better fit within our community.  One of the main things that 826 Valencia does is an after school homework help programme for up to 3 hours every day.  However, there are already at least four homework programmes in this area, so we didn’t feel the need to do that.  After speaking with teachers who mentioned that there was less room in the curriculum for creative writing and having read research on the importance of creativity, we decided to focus on creative writing programmes.

NMF: How does creativity benefit children?

CK: There is a lot of research and long-term studies that have come out of the US and the UK, which have compared groups who are involved in creative arts against those who are not, and measured the subsequent likely benefits.  They have shown that it is associated with better academic achievement, greater participation rates in tertiary education, greater political engagement, greater likelihood to volunteer in the community, and a much lower truancy rate at school.

We also hope, through our long-term evaluation programme, that we can measure more direct benefits on the children, such as improving writing skills.  We are hoping for broad changes such as encouraging the children to be more enthusiastic about writing in general and improving their engagement with learning.

NMF: Why is storytelling as an art form so important?

CK: I think that being able to tell your stories is affirming in the sense that you are expressing the things that are important to you.  Having a tutor sit and help you every week, and having your stories published and put on our website, creates a sense that these stories are being valued.  We hope that this will benefit the children in terms of self-esteem and pride in their work.

NMF: Do the children usually talk about their own experiences in these stories?

CK: It depends.  It depends on what the class is about and it depends on the child.  Some of them really like to do very imaginative writing; others like, telling the truth or using fiction to underline their own truths.  I remember one of the early classes that we did, the children were asked to write a story about a Martian coming to Earth and one of the kids asked why this Martian was coming to Earth, to which another he responded, “Because he wants to find a home.” This particular child had just been removed from his home.  So, I think with all writing, even when it is fictional, it can still relate to your own experiences.

NMF: Have you noticed any direct benefits or effects on the children since the SSF has started running programmes that you might not have otherwise expected?

CK: As I’m not a teacher, when I started doing the classes I didn’t really know what to expect.  One of the things that surprised me was the strength of the relationship between the students and the tutors and how valuable that is.  When we ask the children for their feedback, they often say that the freedom to write about whatever they want is what they like the best, as well as the strong relationships that they have formed with their tutors.

Another interesting moment for me was when a few kids who had been with us since the very first class were interviewed with their parents on the TV.  One of the questions the interviewer asked was, “What difference have you seen in your daughter?”  He responded that his daughter was much more enthusiastic about writing and more confident in telling her own stories, which was really nice to hear.

NMF: What is the best advice you have received on your journey to creating the Sydney Story Factory?

CK: 826 Valencia receives enquiries from all over the world, so they organise one-day courses to educate people on how to successfully run something like 826.  Tim and I attended in April 2011, and David Eggers spoke to us all at the end, giving us one piece of advice that I keep in the back of my head.  He said, “Keep it weird.”

NMF: Did your career as a journalist contribute to your inspiration to open a writing centre?

CK: My journalism past is definitely related to the fact that I wanted to open up a writing centre for children.  If writing was not personally important to me, then I can’t imagine that I would have done it.  I certainly get a lot out of writing, and I think that if there had been a place like this when I was a kid, I would have loved it!  If you’re one of those kids who love writing, it can sometimes be quite a lonely thing as it’s usually quite a solitary existence.  So if there is a place where you can go to engage and collaborate with a whole bunch of other kids who enjoy writing, well that seems pretty great to me.

NMF: What was your relationship with writing when you were a child?

CK: I was always one of those kids with their head in their book.  I was compelled to read and write as it helped me to figure out what I was thinking.  Writing was my way of understanding.

NMF: What are the programmes that SSF offers?

CK: The main programme is our term-long after-school programme for creative writing from Monday through to Thursday in term time, led by Richard Short (our storyteller-in-chief), with the help of the volunteer tutors.  We also run programmes on Sundays for high-school students, workshops during the school holidays, and we offer teachers the opportunity to bring an entire class of kids in for a two-hour workshop.

NMF: The architectural execution of this Martian Embassy is amazing.  Were there any 180 degree turns involved in the construction?

CK: The architects were amazing and they donated their time and resources.  Everything had to be carefully measured as the floor was a bit wonky and the walls had big chunks of cement that jutted out.  The way that I understand it, is they designed the whole concept on a 3D computer model and then they put slices through it, and had these slices computer cut in plywood.  The plywood arrived in 1068 individual pieces that were labelled with a number.  With the volunteers, we had to paint the front and back of each of piece of wood, twice.  So, you had to pull it down off the wall, then paint it, then put it back, then rotate it around and do that 4 times...there was hardly any room to move!  Then the builders put it all together using the identifying numbers. It was like a huge jigsaw puzzle.

NMF: Is this the same interior structure as 826 or was this your original idea?

CK: 826 has a fantastic, weird little pirate supply store at the front, so no, our concept did not come from there.  All of the writing centres are really different though.  The one in Brooklyn has a Superhero Supply Co and the one in London is behind Hoxton Street Monster Supplies.  So, the models are similar but each iteration is quite different.

NMF: How did you come up with the Martian theme?

CK: The Glue Society, our creative agency in Surry Hills, agreed to help us.  They came up with three ideas for the shop, which we took to our volunteers and the kids and asked which ones they liked. The Martian Embassy was the most popular, which was also my favourite as it has this idea of being taken to another world.  I also think it’s great because there are no preconceived visual pictures of what a Martian looks like.   This allowed the architects to have complete creative freedom to say “Right, this is what a Martian Embassy looks like”.

NMF: Has the Martian Embassy shop been successful?

CK: We have surprisingly sold a lot of stuff.  The Glue Society created and designed all of the products and production company Will O’Rourke sourced all of the materials, such as the tins and stickers, and then organised the production.

All day people come up and press their noses against our window, wondering what is inside.  So, it’s very important that whenever they come in, we have someone sitting at the front of the shop to welcome them, particularly because we are new to the area and new to the community.

NMF: Ultimately, what do you want Sydney Story Factory to achieve?  What is the goal?

CK: We intend to be open forever!  In the broadest sense: we want to improve children’s life chances.  We want to give them more options in life and open pathways that they may not have considered before.  We hope to really make a difference.

CK: We do get enquires all the time about setting up another writing centre, everywhere from Wagga to China!  However, the first thing that we want to do is ensure that this one works really well and is really integrated within the local community.  If this is achieved then we would consider being elsewhere.  This project is a volunteer model, so you have to be of the community where it is. So, if you have a group of people in the community who are prepared to set it up, we wouldn’t manage it, we would simply help get them ready.