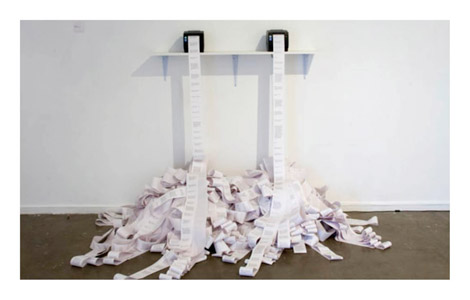 Benjamin Forster is one of seven artists in this year’s edition of Primavera, an annual exhibition for Australian artist aged 35 years and under, initiated in 1992 by Dr. Edward Jackson AM and Mrs. Cynthia Jackson AM and their family in memory of their daughter and sister Belinda, a talented jeweller who died at the age of 29.  Here Benjamin tells us more about his works in this year’s show curated by the MCA’s Anna Davis.

What is your background?

I have an honours degree in Drawing and Printmaking from the Australian National University.

Where did you get your first computer?

I love retelling stories of my youth when we lived without electricity.  It was only a very brief period in my life – when my age could be represented in single digits.  Although I still remember clearly, in a rare display of cooperation with my older sister, saving up pocket money to purchase a tiny black and white television that could be ran off the car battery.  Motivated primarily by the school yard chatter of The Simpsons, after the months of saving we were finally allowed to watch half an hour of television a night.  It was a while after that, when I was in my teens and power plugs became a common fixture to the rentals we inhabited that a computer also appeared.  I am really unsure of the exact moment, technology just kind of slipped into my life.

Affirmative...Or actually, I am kind of ambivalent towards the concept.  I have very little interest in fetishing or romanticising technology.

What prompted you to get a machine to do something human?

An interest in drawing primarily, I learnt to program in order to externalise and test my ideas about drawing, while also seeking to challenge reductionism and rationality.  It was always intended to fail, to expose the inability of rationality and logic to capture what is essentially human.  The drawing machine’s mechanical existence, as opposed to its inherent virtuality, is really only a means to force people to accept the programmatic system as actually drawing...or to fool them into thinking its drawing.

Do you use a pen and paper a lot or do you do everything on a computer?

Drawing and note taking is primal.  I often think that my thoughts only exist in and through interfacing with a surface through mark making.  Without pen and paper none of my works would exist.

In Discourse (2010), to quote Anna Davis, you have ‘created two receipt prints that simulate a never-ending dialogue between Karl Marx and Adam Smith.  The printers are hooked up to an unseen computer that has been programmed to generate responses drawn from two of the authors’ key texts, based on the statistical probability that a  particular word will follow another.  Printed onto long strands of receipt papier these re-mixed theoretical musings accumulate in a  tangled heap on the gallery floor.  They create an image of cerebral disorder that is symbolic of both the history of economic discourse and the digressions of human thought.’  Why Adam Smith and Karl Marx?

Karl Marx and Adam Smith are two reoccurring figures within any history of economics.  As two classical economists with opposing politics, to me they represent icons of the Left and the Right respectively within economic thought.  Karl Marx, popularly known for his role in Communism, also wrote extensively on Capitalism, and towards the end of his life sort to construct a complete theory of Capital.  While on the other hand Adam Smith is responsible for the modern understanding of the free market, famously introducing the concept of the “Invisible Hand”.  These two economist/philosophers major works are cited ad nusium throughout the history of economics, and through repetition their voices lose meaning, while clashing ideologues on each side shift them further in order to support political agendas.  For this reason, these two figures seemed the most appropriate source texts for Discourse.

Can you describe Notes on the Particulates (2012)

I like to think about Notes on the Particulates as an essay – an ill formed and unrelenting struggle to understand language through language in language.  All of my machine-based words can be viewed as thought experiments, and in this vein Notes on the Particulates asks about the role of accumulation in the formation of meaning.  Starting as an empty loop, the printer endlessly re-distributes fragments of Gilles Deleuze’s writings on language from Difference and Repetition and The Logic of Sense.  Slowly this builds up, at first fragmentary it shifts into legibility.  Then as time progresses this is superseded by nonsense, which in turn is transformed into visual forms, clouds.  Until eventually the gently pulverised and ink soaked loop of paper forfeits.  It gives way to its frail materiality, betraying the ideal perfection of machines and words.  The paper jams – breaks – halts – spasms...Silence.  Repeat.

This work is one of my more recent attempts to move away from dependency on complicated computers, and instead use smaller programmed microchips.  In this case, the work is entirely controlled by a small microcontroller attached to the printer’s parallel port.

It does produce an endless torrent of unique drawings.  However, the answer to this question really depends on your philosophical position.  Can a machine think? And does doodling require thought?  My own feeling would be no and yes respectively, and as such no.

Were you familiar with Primavera before MCA Curator Anna Davis selected you for this year’s show?

Yes, from a young age.  Whenever we visited Sydney my mother would take me to the MCA and Primavera was always a highlight for me.

To find out more about Benjamin Forster’s works, visit his website.

To find out more about this year’s Primavera exhibition, visit the MCA website.

This interview was first posted on the 22nd October 2012 on www.mca.com.au, see the original article here.