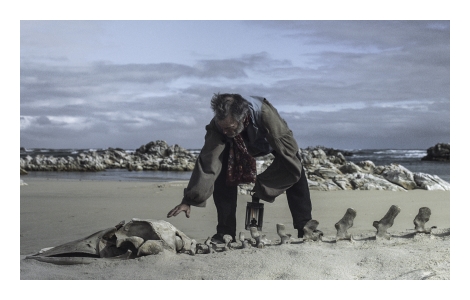 A three-part film project by Mikhael Subotzky examines the dark past that links Britain, South Africa and Australia.

An unshaven, homeless, coloured man, known as Hermanus, comes by, curious about what Hare is seeking. Hare assumes Hermanus is begging.

The men pair up, detect metal, and dig. They uncover a wooden box containing a copper tray, atop a letter by British colonialist James T. Lethbridge, who arrived 200 years earlier.

Hare reads Lethbridge's words, intended for London eyes: "Perhaps it is land itself that is malevolent or reluctant to yield to its new inhabitants?"

These are three characters seen on screen in WYE, a 45-minute film project by South African video artist Mikhael Subotzky.

The title, in phonetically-spelled old English, represents the letter Y: the shape of a dowsing stick Lethbridge uses in vain to divine the spirit of a strange new land, but also marking the geographical connections of Britain, South Africa and Australia.

Born in Cape Town in 1981 into a left-leaning family, Subotzky, who is white, was barely a teenager when Apartheid came to a definitive end with the general election of 1994, when all people, regardless of constructs of race, could finally vote.

At 18, Subotzky set off to travel the world. His uncle, photographer Gideon Mendel, who specialises in contemporary social issues of global concern, suggested Subotzky take pictures. Subotzky bought his first camera, a Nikon, with film.

Subotzky later built a career as a Magnum agency photographer, before diverging into his own photo and video art, his photo essays dealing with gritty realities such as prisoners' lives.

Sitting at SCAF's gallery in Sydney's Paddington, having arrived last weekend from Johannesburg, Subotzky explains WYE not only examines South Africa's tensions, but questions his understanding of Australia as a "developed, so-called advanced society, despite which [it] has many shadows".

Each film within WYE is named after a fictional character: the first, Feio, is the story of a future Australian scientist. Feio studies the historical people of the second and third films. The audience never sees Feio, who has no body, but hears his or her metaphysical voice. Australian actress Arianwen Parkes-Lockwood's voiceover as Feio is slowed down to sound genderless.

In the middle film, named Hare after the metal prospector, played by Antony Coleman, Hare's sense of self is so spooked by race relations he decides he will migrate to Australia, perhaps assuming Australia has reconciled its own colonial past.

"What's important is we never get inside Hermanus' mind," says Subotzky. This is partly so Hermanus can be a foil to Hare's racial assumptions, but also because Subotzky knows as a white artist it is a "no-win situation" to script a coloured person's experience.

Subotzky met the real Hermanus, now in his 50s, when photographing a building site, the Icon, in Cape Town in 2005.

'TAKE A PHOTO OF ME'

Hermanus Van Wyk was employed to lay bricks, but was homeless: he slept under the building site on a mattress. "What are you doing, taking pictures?" he asked. "Take a photo of me."

Van Wyk told Subotzky he had been in prison, and had no family in Cape Town. "He spoke about worrying about who was going to put him in the ground when he died, not having a family who would bury him, basically," says Subotzky.

"It was hugely moving, given this image I had of him labouring underground to build this ridiculous, fancy building."

Van Wyk has since had two children with a girlfriend.

Why did Subotzky use Van Wyk's real first name in the film? "Hermanus for me is almost a mythical name," says the artist.

"I wanted to allude to using him as a fictional sense, in a mirror to these characters. But he is also mirrored to me, in my ethics and the relationships that form in my work."