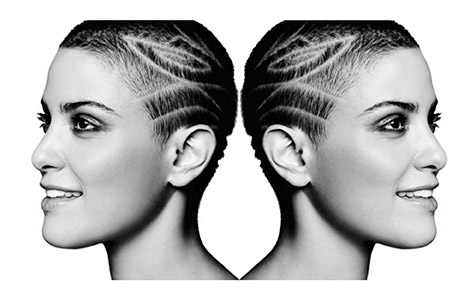 Through digital ports, portals and corporeality, Jordana Maisie asks us to think about the imposed limitations of personal communication technologies with a body of work that spans photography, video, sounds and interactive installation. It was at the point of being in a long-distance relationship for two-and-a-half years - and probably after one too many Skype conversations - that the Sydney artist sought to recognise the importance of human physical connection. Working outside of the totalising hyper-reality of our virtual existence, but utilising its tools, Maisie began making work that deployed technology in a gallery setting. Sparking conversations between our bodies and sculptural, sound or video elements, the works not only encourage but often require her audience’s bodily presence in order to materialise. In Potential energy, 2009, gallery-goers walked gingerly around an abundance of wiring wile concealed sensors caused a line of individual chains to sway in response. Maisie imposed this kinaesthetic connection to the elements, highlighting and re-purposing our bodies within physical space and even transforming the context of the work through time: the spectator inevitably becomes spectacle as they move from experiencing the work itself to a conscious awareness of others viewing their engagement with it.

Maisie’s work promotes a degree of intimacy and playfulness that comes from engaging with the exhibition space. Her self-prescribed task is to make her conceptual ideas manifest in direct experience, honouring human-to-human contact and presenting alternate pathways for interacting with technology. One senses that she achieves her aim by tapping into an irresistible childlike curiosity where movement precludes thinking and technology is made to talk back. As one snoops around Maisie’s recreation of a studio apartment in Movement as metaphor, 2008, sensors are tripped and anonymous voices make banal comments from within the furniture. When encountering her petite dollhouse on the darkened gallery floor in Professional voyeur part one, 2007, we instinctively lean down and overhear a woman’s voice speaking of an intimate relationship, our inadvertent eavesdropping and larger scale making one feel like an oversized and unwelcome Alice in Wonderland.

These works point to the unexpected witnessing of unpublished speech that we can only encounter within our overlapping lived experiences. Maisie’s concern is to counteract the image-driven, self vetted and more solitary communication that happens outside of physical contact where we wade through branded, highly mediated and finite interfaces. Far removed from the unending temporal expanse of the internet chat room, group forum or social networking site – interfaces which disrupt the immediacy of the gaze, landscapes and bodies – these ‘real life’ and ‘real space’ vignettes ask the audience to perceive as Maurice Merleau-Ponty wanted us to: through embodiment, motility and spatiality.

In response to this physical detachment and the proliferation of what Marc Auge first called ‘non-place’ – ahistorical spaces of transit, consumption and universal language – Maisie is also alert to the nuances of site. Time Slice, 2008, was a film and sound installation set at a seventeenth-century Confucius school in Chuncheon, South Korea. Maisie evoked the embedded memory of the place, enlisting a performer to move through the building while chanting and engaging with its history and architecture. The sound was immediately stretched and stuttered via live remix, effectively merging the audience’s attention into both the present and the past.

Though she champions the tangible, the visceral and the body’s place in technology, Maisie is clearly no Luddite. With the development of more gesture-intuitive interfaces, the physicality of media is slowly being appreciated anew and Maisie would like for new technologies to continue to bridge this gap; to piece together the fragmented body that can so far only choose, type and click, to accommodate our in-between states and the shades of our interactions. In The real thing, 2008, Maisie built a colossal kaleidoscope that has the ability to capture images of what stands before it, discompose and refract them back as a matrix of exquisite patterns. Audience bodies are given over to the site as they first generate and then witness their limbs undulating and clothes morphing in unlimited variations of algorithm-induced design. Similarly, Maisie’s 2009 collaboration with performer Robyn Wilson, Forever the motion, also entailed her writing software patches that would project film of Wilson’s body from movement she made seconds before back onto her once she triggered the computer by further movements. This created a looping and pulsating interplay between the computer’s projection of the past and present movements, and the performer was as much responding to the images of her movements as her will to move itself. As Maisie consciously lets go of the picture-maker and allows her audience and inventions to influence the form, she heralds a fresh relationship between interface and viewer – one that is intuitive, unlimited and, above all, equal.